A few weeks back I was feeling.

For those of you who do not know what that is like it can be wonderful and terrible at the same time.

In my experience if I lean into, acknowledge it, or just ride it out something interesting comes out the other end.

It was one of those weeks where unmentionable things were happening in the news and all you want to do is delete all social media and binge watch “Newsroom”.

I am not often one to comment on such things but eventually I saw something I could not ignore.

Whether it’s Charles Barclay or the your uncle over the holidays it often shocks me who holds onto this belief that we are living on a giant crunch-wrap supreme under a dome shaped sky (don’t ever write when you’re hungry).

It also shocks me the reasons some people have for believing this.

Some quote scripture that is thousands of years old describing a firmament (the sky is a dome and the stars are holes in it) or the pillars that the earth sits on.

Some question whether the earth having an axis can even be proven, or cite a world-wide governmental conspiracy.

So I got curious.

I went down the rabbit hole (or turtle hole) and as you will see the hole goes way deeper than I ever could have imagined.

So first of all those things are in scripture.

The Bible is a snapshot in time of how ancient people experienced God and the world around them and so naturally they included some of that language about their old word cosmology into their narratives and poems.

The thing is as time went on that belief was abandoned but that is not the issue here.

The issue is that if you are trying to believe as they believed you are not going far enough!

Let me explain why.

Many ancient people groups including those inhabiting North America at the time, The Kelts and the Israelites believed the earth was flat but there was more to it than that.

They believed the sky was a dome, that the earth sat on pillars, and those pillars sat….

Of a giant turtle….

With the turtle now all out in the open we find ourselves in something called the infinite regress problem.

(Look it up on wikipedia for a brief summary)

In the end it says the turtle has to be on top of something.

(remember in Cosmos when the guy shot the arrow and it either hit something or went on forever and this repeated?)

So lets just say it is on top of something.

Let’s say that thing is another turtle.

It’d have to be a bigger turtle than the one before it.

So now that turtle also has to be on top of something larger.

Why not say it’s another turtle?

Why not say it’s turtles all the way down?

This is how ideas work to.

All knowledge, every idea has to be built on something, having a larger foundation.

It also shows me that even if it was full of turtles of ever increasing size, they still could have an infinite universe full of wonder and awe; something that I can absolutely be okay with because isn’t that the point?

So in my angst and feeling I made a graphic, I got a quote, and will soon be ordering these shirts.

This is a blog I did for Shock The World; an incredible organization in Detroit.
To learn more and read other inspiring pieces go to ShockTheWorld.life 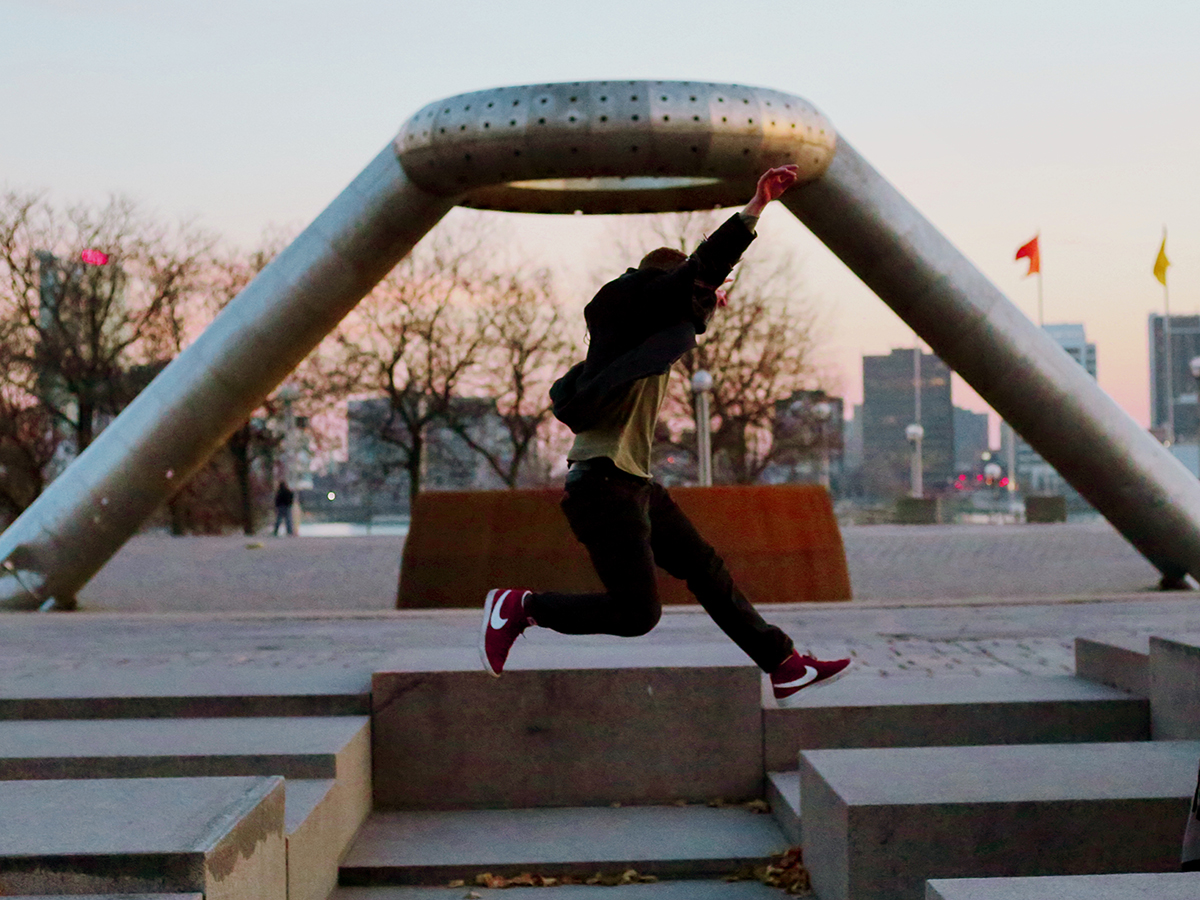 When you show people what chasing dreams can look like, it doesn’t make it easy but it shows them that it is possible.

Who did you dream of becoming when you grew up?

In many of our lives we have had a dream but we have been told by others that it is just not practical; maybe we even heard it so often that we left such dreams behind.

Had you asked me 23 years ago what I wanted to be when I was older, I would have simply, and matter of factly, replied, “A FOX.”

I had a fox mask that I wore as I crawled on all fours throughout the dining room trying to make whatever sound it was I thought the fox made.

Now, maybe that dream you left behind was not transforming yourself into a small woodland creature roughly 1/8th the scale of your current size, but take a moment to ask yourself, “WAS IT REALLY THAT RIDICULOUS?”

Often we look back thinking opportunities have passed us by, regretting that it’s too far behind us for it to even be a possibility now.

This has been on my mind leading into 2018 as I’ve been feeling that dreams I had left behind are getting further away each day. As we get older we may even start to feel that time is against us or running out!

The thing is, I don’t think our brains were wired to constantly regret the past or endlessly worry about the future as we often do. If that was all there is to life, then those are very depressing thoughts. Thankfully, endings aren’t always the end and death doesn’t always have the last word.

I was raised hearing stories from the Bible.

Stories about Jesus and miracles. Stories about things thought lost being found and things made so wrong being set right.

As a Christian, I am a firm believer that the idea of resurrection is firmly woven into the very nature of the world.

That true justice restores things to the way they should be, which often looks a lot more like mercy. That God, who created everything, is a God of resurrection.

The reason most people miss their moment is because people give up on it before they get to it. Last year I felt there was a verse from scripture that I should carry with me. It was in the back of my mind all of 2017 and it is super practical,

“Let us not grow tired of doing good for in due season we will reap if we don’t give up.” Galatians 6:9

I have also heard this verse summed up with the simple phrase, “If you don’t quit you win!”

Whatever that dream is that you wanted to do, or maybe are doing but you are discouraged about at the moment, don’t give up. The story is not over yet.

To quote a hero of mine, “This is not the end, but a fantastic beginning.”

I wrote this post after having worked on and the “poiema” project which can be seen here: https://couragechurch.com/poiema

Enjoy the video?
Please share it with someone who you think will be blessed by it.

Expression as tools to build bridges.

If you were to ask me what this curious golden metal container in the middle of downtown was several months ago, that question is what I would have responded with.

I was curious myself when it popped up, and once I found out what it was for, I knew it had to be a part of this project.

You see these containers painted gold and dropped in the middle of seemingly random areas, are dark when you walk in, but then, all of a sudden, right in front of you, appears a person from a distant land, in as much awe and wonder and confusion as yourself.

Using hidden audio visual technology they are able to connect you with others in similar portals, new friends in some of the most misunderstood places in the world. This is all in an effort to de-stigmatize cultures, cities, and nations through creating unlikely community. From Afghanistan to Cuba, from Myanmar to Korea, and Rwanda to The United Kingdom, it’s no wonder Detroit is on that list.

See we have a tendency to see a movie or hear news that paints an area or group in a bad or dangerous light. This only naturally makes us not want to go there, whether it is out of concern for our safety or just thinking it would make us uncomfortable.

We take bad testimony pretty seriously. Sometimes more seriously than good. But something even more powerful happens when a relationship is sparked.

Preconceived notions start to dissipate and new ideas about people or places begin to form. Someone who is prejudice towards a people group can’t be for long if they make an unlikely connection in an elevator, embrace one of them as a friend, or hear their plight. Friendship changes minds and hearts. I watched from my place of business across the street for months as groups of people from the city and the suburbs would walk into this golden box and learn from someone across the world their history, a traditional dance, play music together with them, or just listen to their personal stories. When they left they were so often astonished.

In 2 Corinthians 5, the Apostle Paul says we have been given the “ministry of reconciliation” and “From now on, regard no one according to the flesh.”

This is actually the only time ministry is really referenced in scripture.

The church as a whole is a beautiful, multi-faceted, multi-cultural tapestry of diverse ideas and people that are united by a come thread; the spirit of our Lord Jesus christ that unites us, His image. When someone wanders into our church culture, what should they walk away with? When it is truly seen, what should people say it looks like?

What draws them in?

Jesus can relate to them but if we don’t look like Him in our ways, how will they know Him and how good He is?

The reconciliation Paul was talking about means friendship and we see how powerful that can be.

This is our job.

Our one job is friendship with the world Jesus so loved.

That is what changes peoples hearts and minds.

We begin to relate with others and it is so powerful that even those who hate have to reconsider themselves in the throws of real relationship.

So if you see a portal in the middle of your city, Don’t be afraid.

They bridge places and reveal things we couldn’t have seen otherwise. That is their nature.

That connection causes us to grow and look more and more like the image of Christ that we are.

In the Poeima video, Pastor Jacob talks about how poems, songs, and art are expressions that become tools to connect us when we’ve been through pain and heartbreak, Laughter, joy and tears.

This sort of art, much like the golden box in capitol park, show us that we have more in common than we think.

What does it look like when we act with an understanding of this commonality?

IT BECOMES A PICTURE OF GRACE.

We see this acted out in scripture in Acts 2:42-47, an image painted for us of what the early church looked like.

“They devoted themselves to the apostles’ teaching and to fellowship, to the breaking of bread and to prayer. Everyone was filled with awe at the many wonders and signs performed by the apostles. All the believers were together and had everything in common. They sold property and possessions to give to anyone who had need. Every day they continued to meet together in the temple courts. They broke bread in their homes and ate together with glad and sincere hearts, praising God and enjoying the favor of all the people. And the Lord added to their number daily those who were being saved.”